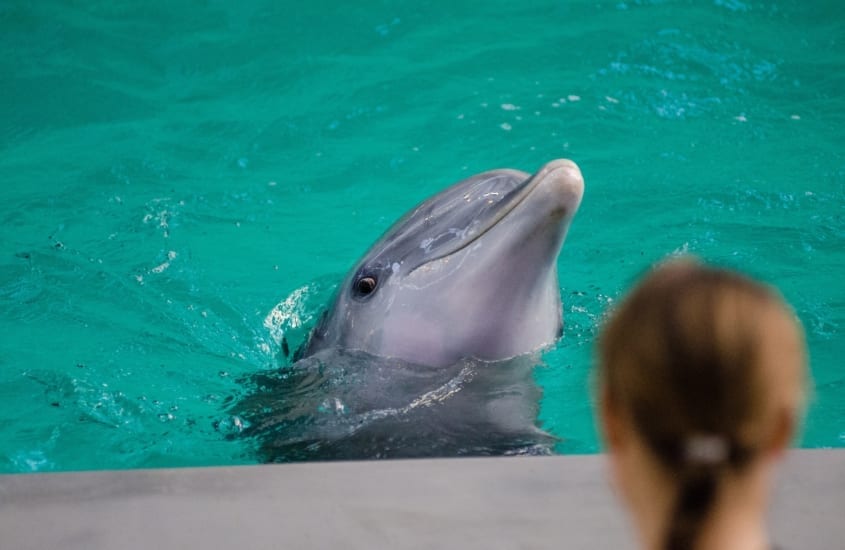 The study of marine biology helps us better understand our oceans and the complex issues they face. This course is ideal professional development of anyone currently working in the industry, or for students interested in a marine studies career.

Some of the outcomes achieved by undertaking a marine biology course online include:

The underwater kingdom that makes up Australia’s oceans is home to thousands of marine plant and animal species not found anywhere else in the world!

The Bottlenose Dolphin is a marine mammal that can swim up to 260 metres below the ocean’s surface. These beautiful creatures have unique dorsal fins and can also be identified by their signature whistle. They are found around the coastline of Australia in temperate and tropical waters – occupying open coastlines, sheltered bays, waterways, lagoons, estuaries and even the lower reaches of some rivers.

Humpback Whales are the superstars of the sea, putting on a spectacular show with their dives, rolls and amazing breaches out of the water for sightseers in Australian waters! They’re also the gentle giants of the ocean, weighing in at up to 50 tonnes and measuring between 14 and 18 metres in length!

Highly intelligent and owning the title as the biggest ray in the sea, this majestic marine creature has a wingspan of up to 7 metres. Manta Rays can be found cruising the waters of the Great Barrier Reef and are particularly prolific in the winter months off Lady Elliot Island.

The Loggerhead Turtle is found worldwide. In Australia, they inhabit coral reefs, bays and estuaries in tropical and warm temperate waters off the coast of Queensland, Northern Territory, Western Australia and New South Wales. These amazing creates are the largest of the soft-shelled sea turtles with a shell about 92 centimetres long and weighing 113 kilos!

Coral-crunching sand-makes, these brilliantly-coloured fish grind down coral reef into sand to make islands rise! A bump head parrotfish can excrete 90 kilograms of sand in a year. Much of the coral they consume is dead and includes old debris, so they’re not as destructive as they sound.

Made famous by the Pixar film Finding Nemo and Finding Dory, the Clownfish is one of the Great Barrier Reef’s Great Eight! These striking orange and white fish are protandrous hermaphrodites, which means when a female clownfish dies, the male will change its sex to female and stay female for the rest of its life!

Easily identifiable by the prominent black tip on their fins, these sharks are among the most abundant sharks found in the shallow waters of tropical coral reefs. This timid, skittish shark is relatively small, reaching between 1.5 and 1.8 metres long and seldom poses a danger to humans. Its diet is primarily fish, crab, lobster, octopus and other molluscs.

There are about 15 different species of sea snakes found on the Great Barrier Reef, and while all produce lethal venom, it’s rare for them to use it on humans unless they feel threatened. The main differences between land and sea snakes are that sea snakes have a paddle-shaped tail and they give birth to live young!

This brightly coloured giant fish reaches up to six feet long and comes in hues ranging from electric blue to green purplish-blue and red-orange! The Maori Wrasse has a vital job in protecting the environment as it eats the creatures that attack the reef, including the sea hare, boxfish and crown of thorns starfish.

So, You Want to be a Marine Biologist?

If this marine biology course online inspires you to become a marine biologist, you’ll need to pursue a degree in marine biological science at the university level. Many institutions offer this type of program. If you’re not sure it’s the right career for you – complete both of these professional development courses and try to gain relevant work experience in the industry before committing to a university-level qualification.

With a marine biology course online like our Certificate of Marine Biology, you’ll gain a sound knowledge of marine organisms, which can enhance your current qualifications or prepare you for a fascinating career in marine biology.