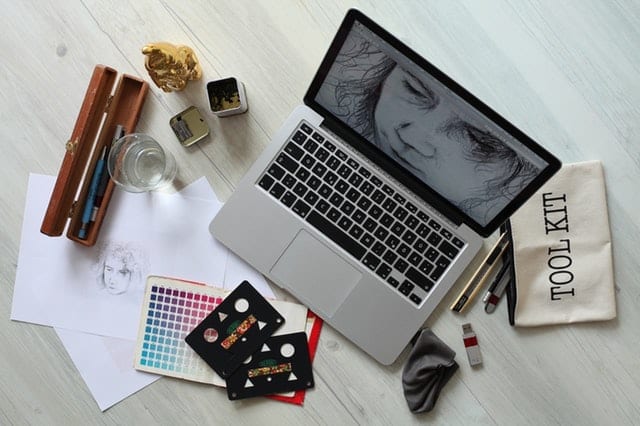 Visuals capture attention, are easily remembered and more often than not, create an impression that’s not only long-lasting but economically rewarding. Graphic designers are the ‘artists’ of the communication world. They have a unique ability to use text and illustrations to create visual compositions, bring a concept to life, and in terms of a client’s needs, solve problems!

So if you are passionate about all things visually inspiring – from brochures and buildings to book covers and beer bottles – then get those creative juices (and your income) flowing with our NEW course – the Certificate of Graphic Design!

A graphic design course will give you skills to create a myriad of creative pieces across a range of commercial disciplines from printed material like brochures and branding elements like logos, to multimedia elements like animation and videos. And the job roles can be as varied as your creations themselves! Skilled graphic designers can work in a variety of industries, including:

Many graphic designers also enjoy freelancing careers, whether it’s with an organisation’s or ad agency’s in-house design team or running their own business. Graphic design skills are also in demand, which is illustrated by both job growth and potential salaries. The number of graphic designers in Australia is expected to increase by around 7500 people to 67,000 people in 2023, earning average salaries of around $54,000 (and rising!) according to PayScale.

What we know as graphic design today essentially began after the invention of the printing press in the 1400s (although visual communications harp back to caveman times!) Modern-day graphic design is practised by millions of people around the world. But some have genuinely left their design footprint and still impact the industry today. These are the innovators, risk-takers, impact-makers who will inspire your future graphic design career! (And they’re in alpha order so you can make your own decision about who is your favourite).

An American graphic designer and one of two art directors at Harper’s Bazaar, Ansel was also the first female art director of Vanity Fair, Vogue and House & Garden – and all in the one lifetime! She has also produced fashion campaigns for Versace and Karl Lagerfeld and worked with artsy greats including Andy Warhol and Annie Leibovitz.

Bass distinguished himself as a designer in Hollywood by implementing kinetic typography (the animation of text) into the titles and credits of movies including Psycho, Vertigo, and The Shining. Not impressive enough? He also created the original logos for American brands Kleenex, Girl Scouts and Quaker Oats.

When studying graphic design, Davison was approached by Nike founder Phil Knight to design a logo that ‘had something to do with movement’. The result was one of the most iconic logos of all time – the Nike ‘swoosh’. And despite her being paid only $35, it proves that you don’t have to be a famous designer to create priceless artwork!

The founder of New York Magazine, Glaser, was the first graphic designer to be awarded the highest honour for artists in the US – the National Medal of the Arts. His art is featured in the Museum of Modern Art, and probably his most famous achievement was the design of the I ❤ NY logo – which he created in the back of a taxi!

Best known for his book cover designs (over 75 of them!), Kidd is the art director for Random House publishing and has produced work for writers including Dean Koontz. Author Oliver Sacks even has a contract clause stating that Kidd be the exclusive designer for all of his book covers.

If you’re a typeface fan, then you’ll know all about Swiss Style graphic design, which focuses on readability, cleanliness and visual hierarchy. Miedinger is most famous for being the creator of the swiss-style Neue Haas Grotesk in 1957. Not ringing any bells? It was renamed Helvetica in 1960, and it’s now one of the most well-known typefaces in the world.

A London-based art director, Moross has a list of impressive clients including Vogue, Nike and Ray-Ban – and she’s only in her early 30’s! In 2012, she founded her own studio, which has since expanded to include not just branding but music videos and is a frequent lecturer, offering advice on how to make it in the competitive design world.

Myerscough’s work is predominantly based around environmental graphic design – pop-up pieces that make spaces colourful, exciting and thought-provoking. For 30 years she has designed three-dimensional works that make people feel a sense of belonging and her work can be seen around the UK – from exhibitions to offices and schools

Often called the ‘father’ of graphic design, Rand published a book titled Thoughts on Design in 1947, which contained theories that have shaped the graphic design world as we know it today. He has designed logos for Westinghouse and IBM, and he pioneered the Swiss Style graphic design movement favoured by Max Miedinger (see above).

Typography has two essential elements – the word the characters spell and the image the characters make. For Trouchut, the image comes first, and he draws his inspiration from fashion and street and pop culture. His CV is pretty impressive as well, with clients including Audi, Adobe, Apple, MAC and MasterCard.

Line, shape, colour, texture, value and space are the six basic elements of graphic design. These will become your new best friends in your new visually creative career with our Certificate of Graphic Design!