Gain Valuable Insights Into Animals With Our Pig Husbandry Course 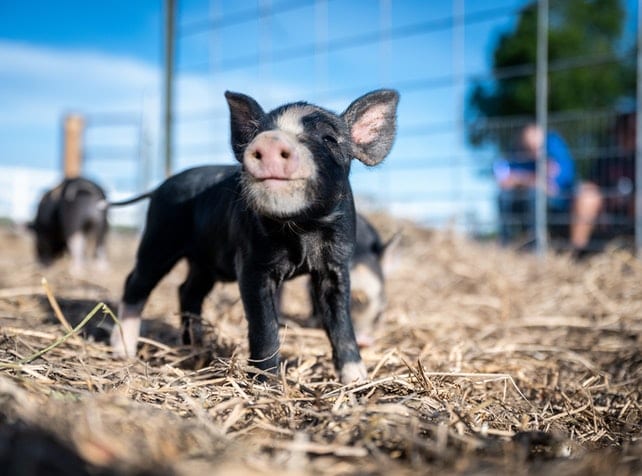 Pig production contributes over $5.2 billion to the Australian economy according to Australian Pork Limited, and greater demands from meat processors and rising poultry prices are forecast to continue to support the industry over the next five years. So if you deal with pigs on a daily basis or are keen to gain insights into this uber-intelligent animal, then this course is for you!

Our Certificate of Pig Husbandry is ideal for farmers; piggery managers, hands or breeders; those in the pig retail, marketing or wholesale industries; or those interested in keeping pigs for self-sufficiency or as a hobby.

In this professional development course, you will gain a solid foundation in pig biology, production and husbandry with an emphasis on how to manage the practical daily needs of pigs — including sows, boars and piglets.

You will learn about pig health, nutrition and feeding, selective breeding and herd management, and the various pig breeds including hybrids. You will also learn about building systems, pig production systems including extensive, intensive and free range systems, economics, environmental controls and aspects of farm management including record keeping. Oink!

Outcomes achieved by undertaking a pig husbandry course include:

As you’ll learn in our pig husbandry course, there are eight pure breed pigs remaining in Australia. All of them were originally imported, however, for biosecurity reasons the importation of live pigs is no longer permitted. Three of these breeds are common in commercial pork production — Duroc, Landrace and Large White. The remaining five are typically used by outdoor producers and some of these are quite rare.

This breed is an older breed of domesticated pig that originated in the United States and formed the basis for many mixed-breed commercial hogs. The Duroc lines currently in Australia were imported in 1981 from New Zealand and Canada in the early 80s. Durocs are muscular, large-framed, of medium length, golden yellow and reddish-brown in colour, and have partially-drooping ears. They are used in cross-breeding programs as a terminal sire when crossed with Landrace or Large White cross sows, as they are not a good maternal sire. They also tend to be one of the least aggressive of all swine breeds that are raised for meat.

Landrace pigs were originally bred in Denmark and imported into Australia up until 1973 — mostly from Great Britain and New Zealand. They are white in colour, and their ears droop and slant forward with their top edges nearly parallel to the bridge of their straight noses. They are noted for their ability to farrow and raise large litters.

Originally developed in the UK in the late 1700s, this breed is popular in all major pork producing countries around the world. They are white with a moderately long head, a broad snout, erect ears and a slightly “dished” face. They have wide chests, a level and wide back, and necks that are fine, long and evenly full to their shoulders. Large Whites are typically crossed with Landrace pigs and this cross is often used as the maternal line in commercial herds. They are prolific breeders and have a good carcass quality.

Originally from central England, the most notable ability of this breed is their ability to forage. They have erect ears and their ginger coats make them adaptable to a variety of climates and protect them from sunburn. They are agreeable in disposition and have an active intelligence. Sows make excellent mothers, and piglets are vigorous and often have 100 per cent survivability, but they are slow growing compared to other breeds.

Originating in the West Country of England, this breed was very popular in Australia for many years, but they are quite rare today. They have lop ears and are black in colour with a white saddle over their shoulder. Wessex Saddlebacks are popular for their docile nature, ability to forage and their excellent mothering ability.

This is one of the oldest breeds in America. They are black with erect ears and a white belt that totally encircles their body, including both feet and front legs. They have been used as a terminal sire in cross breeding programs overseas and are valued for their quality carcasses.

This breed is the oldest registered breed in the world, with the first hog ever recorded being bred by Queen Victoria. Berkshire pigs have erect ears, shorter necks, more of a “dish” face and are black with white on their tail tip and legs. They are docile and hardy animals and are popular with outdoor producers.

This breed also originated in England and are now quite rare as a pure breed. They are a black pig with huge black floppy ears. Large Blacks are known for their foraging and their ability to raise large litters, and are often crossed with other breeds for pork production.

Pigs are one of the smartest of all domesticated animals, and been have been placed fourth on the intelligence list behind humans, primates and dolphins/whales. Here are some fascinating facts about pigs that will give you even more motivation to undertake our pig husbandry course.

Develop the necessary skills to manage pigs for commercial production, self-sufficiency or as part of your own pig-friendly hobby farm with a pig husbandry course, such as our Certificate of Pig Husbandry.

Enhance or Build Recreational Space With Our Facility Management Course