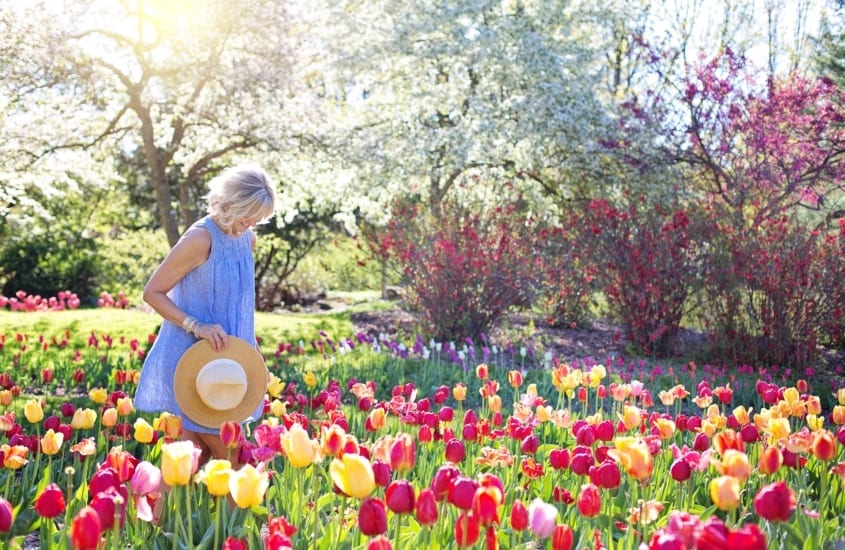 Landscape design is a multifaceted skill, but it’s not just about making landscaping spaces look nice! It’s also about understanding timbers, plants, soils and other materials, and adapting them to suit the climate, setting and features of the environment you are working with.

It also involves being able to take a vision and transform into a space where people want to socialise, relax or work. Effective landscape designs can enhance the value of properties, provide environmental advantages and even enrich the communities in which they’re situated.

Our Certificate of Landscape Design is ideal for garden designers, garden maintenance staff, landscape construction workers and anyone with a passion for creating beautiful outdoor spaces. The course will teach you about horticulture, plant names and the history and styles of gardening. You will learn about the different garden styles — including cottage, oriental, Mediterranean and subtropical gardens, and their furnishings including lighting, garden art, furniture, ponds, fountains and water displays. Our landscape design course will also teach you how to pre-plan a site, design and generate landscape drawings, and create different environments — from those in backyards and parks to play landscapes and those in sporting facilities.

Outcomes achieved by undertaking a landscape design course include:

From designers who host popular TV shows to those who are recognised at the world’s most prestigious gardening awards, there have been a number of influential landscape designers over the years. They have provided inspiration to home gardeners, gardening gurus and even those who have studied a landscape design course. Here are some of Australia’s most popular.

A landscape designer and gardening media personality, Jim graduated from Burnley Horticultural College in Melbourne in 1992. In 2006, he was invited by the Singapore National Parks Board to compete in the inaugural Singapore Garden Festival. Here, he won a gold medal and the RHS (UK) Award for Horticultural Excellence. He won the RHS Award again in 2010.

Jim holds over twenty internationally recognised design awards, including winning a gold medal at London’s Chelsea Flower Show in 2011. He has also won Horticultural Excellence and Best in Show awards at the Melbourne International Flower & Garden Show, and the A.W. Comeadow medal – awarded for outstanding design of a display at a major horticultural show.

Jim is the current National President of the Horticultural Media Association of Victoria. He now designs gardens for commercial and private clients, and his international projects include designing gardens for garden shows and running garden design masterclasses.

Paal is an award-winning landscape designer known for his innovative approach to creating extraordinary gardens. Growing up in Ballarat in Victoria, his natural world became his inspiration, and he achieves balance through the use of different colours, textures and shape. He is also committed to demonstrating strong design principles in order to enhance a functional space.

At the 2009, 2010 and 2012 Melbourne International Flower & Garden Shows he was awarded gold medals, and he was also awarded the prestigious Royal Horticultural Comeadow Award for his 2010 submission, titled “The Wave Garden”. Paal’s scope of achievements is vast, from designing and constructing luxury balcony and rooftop gardens to regularly featuring in Australia’s top lifestyle and landscaping magazines.

Paal represented Australia at the 2015 Japan Garden & Flower Show. This is considered the ‘gardening World Cup’ and here he competed against green thumbs from over 30 countries. He received the Best Design Award, and in 2016, was awarded the People’s Choice Award.

Owner and Director of Daniel Tyrrell Landscapes, Daniel is an award-winning Melbourne landscape designer with a reputation for creating outdoor rooms and gardens. Since launching his business in 2003, he has forged a reputation as a leader in the design and construction of outdoor spaces.

In 2009, 2011 and 2013, he won Silver Medals at the Melbourne International Flower & Garden Show and in 2013, also won the Honda Sustainability Award for his entry titled ‘The Backyard Room”.

Daniel’s designs suit today’s modern lifestyles and he seeks to create balance and ambience between homes and their outdoor spaces. He believes gardens can be many things — from relaxing places to soothe the soul to landscapes that enhance and stimulate the senses and emotions.

Today, he tailors each of his creations to its surroundings and ensures his clients’ briefs are carefully considered in the process of taking their vision from paper to soil.

Ian has been in the industry for over 25 years and began his construction, maintenance and landscape design business in 1996 after completing two apprenticeships, several horticultural courses and working extensively abroad.

He has won gold and silver-gilt medals in 2008, 2010 and 2011 at the Chelsea Flower Show in London, and his most recent achievements include winning a gold medal at the 2015 Melbourne International Flower & Garden Show. He has also won the Horticultural & Media Association’s Best Use of Plant Life Award for his show garden titled “Cross Roads”.

These awards have cemented him as a designer fit to be on the Australian and international horticultural and garden design stage. His business, Ian Barker Gardens is one of the most sought-after landscape design and construction companies in Australia.

Alison has a multi-disciplined design background, with a Degree in Industrial Design and a post-graduate Certificate in Garden Design from Melbourne University. Her qualifications have meant she has worked in various fields — from exhibition to toy and fashion design.

In terms of awards, in 2015 Alison won a Gold award at The Melbourne International Flower & Garden Show in the Boutique Gardens category with her creation “Pipe Dream”. She has also won an international landscape designer award in Singapore in 2016.

Alison’s focus is now on satisfying her love of plants, sustainability and landscape design. She loves designing for smaller spaces and challenging sites, and is passionate about the finer details.

Known for his role as a presenter on the TV show, Selling Houses Australia, Charlie has been designing and building gardens for over 12 years. He won a Silver-Gilt medal at the Chelsea Flower Show in 2015 with his award-winning design titled “The Time in Between”, which was a tribute to his late father who passed away when he was 17.

Charlie and the team at his business Inspired Exteriors are passionate about creating beautiful, inspiring outdoor spaces that enrich their owners’ lives. They have worked on a number of high-end projects, including being commissioned to work in Hong Kong, Singapore, France and the UK. They have also won multiple awards at the Sydney and Melbourne International Flower & Garden Shows, and gold medals at The Australian Institute for landscape Designer and Managers (AILDM) awards.

Having been in the industry for over 25 years, Paul is been regarded as one of the foremost garden designers in Australia today. He holds a Bachelor of Applied Science (Horticulture) from the University of Melbourne, and his extensive list of projects spans public and private commissions in Australia, New Zealand, Europe, North America and the West Indies.

Paul has displayed countless exhibitions in Australia, been featured in a range of publications and has won numerous awards, including the Mobil Pegasus Award and the Centenary Medal.

Paul is committed to fulfilling the aspirations of clients that seek gardens that are expressive of the classic simplicity and timeless elegance for which he is internationally renowned. His personal insights have been included in a successful series of books, including The Defined Garden and The Garden at Stonefields.

Jamie is a qualified horticulturist and multi-award-winning international landscape designer who has been designing landscapes and water features in Australia and overseas since he launched his design practice in 1998. Durie Designs has offices in Sydney and LA, and he and his team have won multiple prizes and commendations including from the Singapore Garden Festival and the Melbourne International Flower & Garden Show. He has also won gold medals at the Chelsea Flower Show, and at gardening events in Tokyo, Auckland and New Zealand.

Jamie has also hosted and produced multiple TV shows, including The Outdoor Room, Top Design, Australia’s Best Backyards, and Backyard Blitz. In 2001, he made his debut into the realm of furniture design and his furniture is now retailed worldwide.

Learn how to plan, create and make outdoor spaces come to life with a landscape design course, such as our Certificate of Landscape Design.

Nurture Your Love Of Plants With Landscape Design Courses!
Subscribe to Newsletter