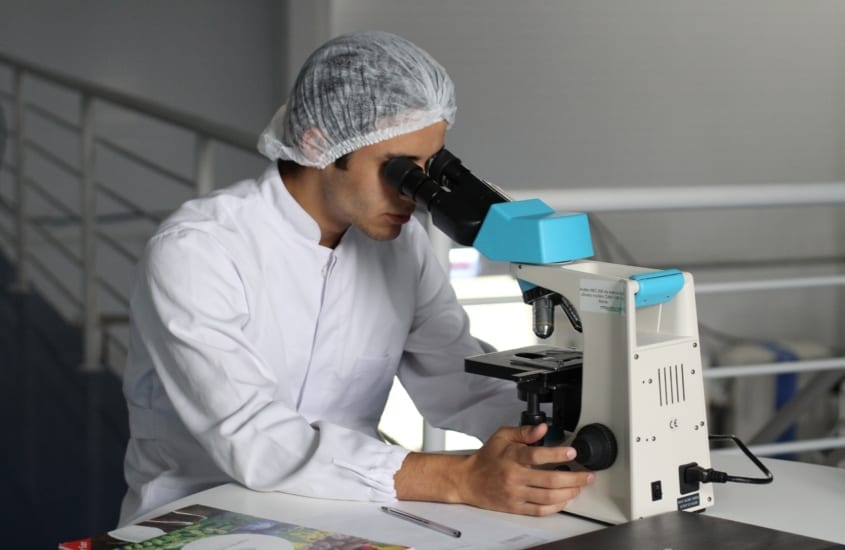 Also known as criminalistics, forensic science is the application of science to civil and criminal law. And the legal system widely recognises the role of forensic science — particularly in criminal offender trials — because when scientific techniques are used, there is little scope for injustice or bias.

Our Certificate of Forensic Science course is ideal for anyone considering a career in law enforcement or criminal law, including those working in investigative journalism, legal offices, the security industry, and even those who would like to pursue a career in crime writing!

It will give you a fundamental understanding of the nature and scope of forensic science, including techniques like fingerprinting, anthropometry and bloodstain analysis. You will learn about evidence collection and analysis, the types of physical and biological evidence, and specialist forensic services like pathology, psychology and anthropology. You will also study criminal profiling and intelligence, criminology and psychological theories, the ethical issues involved in forensic psychology and how to present evidence in court.

The History of DNA Profiling

DNA (which stands for deoxyribonucleic acid) is found inside almost every cell in a human’s body and is unique to individuals. DNA profiling is the process of determining an individual’s DNA characteristics, and in criminal investigations, is a forensic technique that compares criminal suspects’ profiles to DNA evidence to assess the likelihood of their involvement in a crime. Forensic science courses delve into the fascinating world of DNA evidence, but how did profiling come about and how does the process work today?

The use of DNA as a material for the identification of an individual first came about with scientific advances in the 1980s. American biologist, Rd. Jeffrey Glassberg filed the first patent covering the direct use of DNA variation for forensics in 1983.

Meanwhile, in the UK, geneticist Sir Alec Jeffreys was independently developing a DNA profiling process in conjunction with two members of the Forensic Science Service (FSS). It was first used forensically in solving the murder of two teenagers who had been raped and murdered in Leicestershire in 1983 and 1986. In the inquiry, the DNA contained within blood samples obtained from around 5000 local men, resulted in the exoneration of a man — Ian Kelly — who had confessed to one of the crimes. It also led to the conviction of a man — Colin Pitchfork — who had coerced Kelly to stand in for him when providing a blood sample.

A co-worker reported the deception to the police and Pitchfork was arrested. His blood was sent to the lab for profile development and his profile matched the DNA left by the murderer. This confirmed his presence at both crime scenes and he subsequently pleaded guilty to both murders.

These days, to make biological samples into a format where they can be compared between people, samples must undergo a multi-step process. In criminal investigations, DNA is extracted from samples at crime scene items. The first step is to ‘break open’ any cellular material present in the sample to release the DNA into a solution. From there, it is purified and the small amount of DNA left over, if existing, is replicated in the areas that are unique to individuals. Via a computer database, it is then output as a graph with peaks known as an electropherogram. The peak positions are then converted into a series of letters and numbers — the DNA profile.

A Day In The Life Of Forensic Scientist

Dr Charles Connnor is a biological examiner, authorised crime scene examiner and DNA scientist at Forensic Science Service Tasmania (FSST). With a medical research background, including a PhD in medicine and Honours in virology and microbiology, Dr Connor began working at FSST in 2002 and now performs a number of roles at the organisation’s lab. A snapshot into his ‘typical’ day offers some insights into the work he performs and inspiration for those keen to undertake forensic science courses.

The FSST is based in the South of Tasmania with a team of 32 staff. The biology team receive around 3000 cases a year, which equates to around 7000 items that need examining. He works closely with Tasmania Police on major crime scenes such as woundings, murders and sexual assaults, and provides expertise on scientific testing and bloodstain pattern analysis.

In the lab, his day generally begins with the review of a crime scene file that gives him some context into what is alleged to have happened and what might have happened. With that information, he then examines items, applies specific tests and takes samples for DNA profiling.

Once DNA has been profiled, it’s then a matter of comparing a reference sample from a known person to the crime scene profile. If the DNA profiles are exactly the same, it is called a DNA match. DNA matches can also be found by running the profile through two computer databases — one local and one national. There are around 27,000 unique reference samples on the local Tasmanian DNA database and over 980,000 on the national database.

Dr Connor believes there has been much improvement in DNA profiling over the past few years. Testing has become more reliable, sensitive and robust. It has also gone from the statistical chance of someone matching a profile being in the millions to the septillions (that’s a number with 24 zeros!)

Several new techniques have been developed in the past decade that has increased the way DNA can be used as part of the criminal justice process. These include:

A DNA profile can demonstrate genetic relationships when the profiles are matched on the basis of the number of STR markers that are shared. For example, a parent is expected to share half of their STR markers with their children, because half of a child’s genetic code is received from each parent. Familial searching is used in criminal investigations where DNA evidence is found at a crime scene and a match can’t be established with any of the DNA profiles held on databases. However, these partial matches may be identified, and may indicate the DNA profiles of genetic relatives, and can provide new leads and a greater chance of identifying suspects.

Based on the same principles as familial matching, in kinship matching family members voluntarily submit samples of their DNA to investigators. Often used in natural disasters involving multiple fatalities where unidentified bodies are involved. If a partial match is found, it signifies a link to a family member and can reduce the time required to identify bodies.

Mitochondria are structures within our cells that are responsible for the production of energy. Each mitochondrion has its own DNA, and mitochondrial DNA (mtDNA) is maternally inherited, and identical between maternal relatives and siblings. This type of profiling can be used to provide greater specificity in familial searches where a number of partial matches are obtained. It can also be used in the identification of degraded samples such as skeletal remains, where there may be insufficient nuclear DNA to create a profile.

The Y chromosome is a sex-determining, paternally inherited chromosome. Y-STR profiling can be used to narrow familial searches where a number of partial matches are obtained. It can also be used to distinguish between female and male DNA in sexual assault cases where samples taken from the victim are mixed, and where it is difficult to obtain an accurate profile of the suspect.

Our Certificate of Forensic Science course will arm you with the skills to embark on a career in forensic science or gain new specialised skills to advance in your area of career expertise.

Understand the Mind With Our Criminal Psychology Course