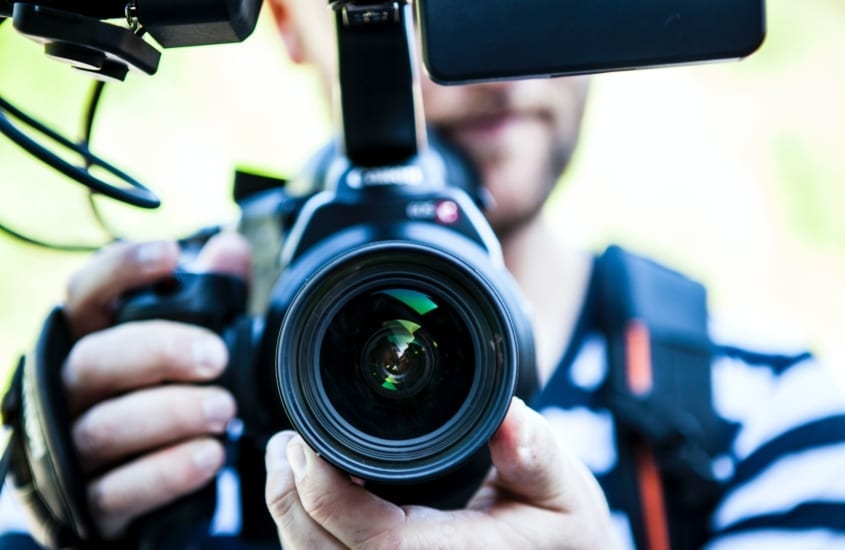 Master the art of photography and get your work published with our inspiring photojournalism course, the Certificate of Photojournalism!

With so many would-be photographers out there, publishers can be very choosy and often prefer published photographers and/or those who have qualifications like a photojournalism course. This photojournalism course will teach you how to select photos for specific publications, submit work, and meet the requirements of an editor or publisher. You’ll also learn how to publish your own work online, generate ideas for photo stories and deal with ethical dilemmas.

Outcomes achieved by undertaking a photojournalism course include:

Photojournalists tell stories and often put a spotlight on those who deserve to be heard, changing their lives for the better. Our photojournalism course will take you one step closer to the accolades that the following renowned historical legends have achieved.

Bourke-White was the first American female war photojournalist, and in the 1930s, the first Western photographer permitted to take photographs of Soviet industry under the Soviet’s five-year plan. She travelled around Europe recording how Germany, Austria and Czechoslovakia were faring under Nazism, and how Russia was faring under Communism. While in Russia, she also photographed a rare occurrence – political leader Joseph Stalin with a smile on his face!

In 1936, she was hired as the first female photojournalist for Life magazine, and one of her photographs appeared on the cover of the first issue. Bourke-White held the title of Staff Photographer at the magazine until 1940.

Parks became prominent in the field of US documentary photojournalism, particularly concerning the poverty and civil rights surrounding African-Americans. A self-taught photographer (no photojournalism course here!), he first obtained work as a freelance portrait and fashion photographer, and in the early 1940s, began to chronicle the city’s South Side black ghetto.

This won him a fellowship with the Farm Security Administration, and while working as a trainee, he created one of his best-known photographs, “American Gothic”. Later in his life, he undertook photographic essays for Life magazine and joined the Standard Oil Photography Project in New Jersey, which assigned photographers to take pictures of small towns and industrial centres.

Arbus primarily worked to normalise marginalised groups and worked with a wide range of subjects including strippers, nudists, carnival performers and members of the LGBTQ+ community. By befriending, not objectifying her subjects, she was able to capture a rare psychological intensity in her work.

In her lifetime she achieved notoriety, beginning in 1960 with the publication of photographs in magazines such as Harper’s Bazaar, Esquire and London’s Sunday Times Magazine. In 1963, the Guggenheim Foundation awarded her a fellowship for her proposal entitled, “American Rites, Manners and Customs”. The first major retrospective of her work was held in 1972 at the Museum of Modern Art in New York, and it garnered the highest attendance of any exhibition in the museum’s history to date.

Ut is a Vietnamese American photographer who began taking photos for the Associated Press (AP) when he was just 16 years of age. In 1973, he won both the World Press Photo of the Year and the Pulitzer Prize for Spot News Photography for his work, “The Terror of War”, which depicted children fleeing from a napalm bombing during the Vietnam War. His own brother, another AP photographer, was killed in Vietnam years earlier and Ut himself was injured numerous times while on assignment.

In September 2012, on the 40th anniversary of the photo, he became the third person inducted by the Leica Hall of Fame for his contributions to photojournalism.

English photojournalist Burrows also spent over nine years covering the Vietnam War for AP. One of his most famous images published first in Life magazine in 1965 was titled, “One Ride with Yankee Papa 13”. This captured the death of co-pilot Lieutenant James Magel while flying in a helicopter with the US Marines.

In early 1971, Burrows’ was elected a Fellow of the Royal Photographic Society. However, he died in February that year along with three fellow photojournalists when their helicopter was shot down over the Ho Chi Minh Trail. One of his other famous images, “Reaching Out“, which captures a US Marine reaching out to a wounded comrade, was published in Life magazine following his death.

The World Press Photo Contest is a highly anticipated photojournalism event that recognises and celebrates the best visual journalism produced internationally every year. 2019’s awards ceremony was held in Amsterdam, and over four million people have now seen the prize-winning photographs in 45 countries. Here is all the inspiration you’ll need to undertake our photojournalism course!

World Press Photo of the Year

American photojournalist John Moore took out the top prize at the 62nd annual contest with a photo titled, “Crying Girl On The Border”. As a senior staff photographer for Getty Images, Moore has been focusing on immigration and border issues since 2008. His haunting image shows a Honduran toddler wailing as a US Border Patrol in Texas searches her mother.

This particular image summed up the US government’s policy of separating families at the border and reinforces why the public outcry against these practices was so strong. Judges deemed his piece a combination of technical prowess and storytelling capabilities that produced “a jarring image that is impossible to look away from”.

Born in the Netherlands, Pieter Ten Hoopen’s submission, titled “The Migrant Caravan”, captured the thousands of Central American refugees who joined a caravan heading to the US border during October and November 2018. Migrant caravans travel to the border at different times every year, but this was the largest in recent memory according to the United Nations, with over 7000 travellers, including at least 2300 children.

Travellers included a mix of people fleeing harsh economic conditions and those facing political repression and violence – and all were hoping for a better life. However, although travelling via caravan offered a degree of safety on a dangerous route, conditions along the way were gruelling. Most travellers walked over 30 kilometres a day in brutal temperatures of over 30°C.

A new award for 2019, this category honoured a photographer who combined visual skills and creativity to produce a story that captured a journalistically important event or issue from the previous year.

After nearly four years of conflict in Yemen, at least 8.4 million people are at risk of starvation, and 22 million people – almost 75% of the population – need humanitarian assistance. However in many cases, near-famine conditions have been caused not so much by the unavailability of food, but because it has become unaffordable due to import restrictions, fuel scarcity and a collapsing currency.

The winner of this award, Lorenzo Tugnoli, captured the war the UN has termed ‘the world’s worst man-made humanitarian disaster’ in a submission called the “Yemen Crisis”.

The millennia-old practice of falconry is experiencing an international resurgence, especially in Arab locations. And although falcons bred in captivity have helped diminish the trade-in captured wild birds, some falcons in the wild continue to be at risk. These include sakers, which are endangered due to habitat loss and the illegal wildlife trade. UNESCO recognises falconry as an Intangible Cultural Heritage of Humanity (ICH), a title which ensures better protection of important intangible cultural heritages worldwide.

Winner of this category was Brent Stirton, an employee of Getty Images for National Geographic, with his submission, “Falcons and the Arab Influence”. Stirton’s photo afforded a ‘birds-eye’ view of a female saker falcon and her nesting chicks in Erdene Sant in Mongolia.

Bénédicte Kurzen won this category for his submission titled, “Double Trouble, Blessed Twice”, where he used two colour filters to express duality – of identity and the attitude towards twins. Nigeria has one of the highest occurrences of twins in the world, particularly among the Yoruba people in the southwest. Over the years, communities have developed different cultural practices to twins, and at one stage in some regions, they were considered evil and either vilified or killed at birth.

Nowadays, their arrival is generally met with celebration, and many think they bring wealth and good luck. In the town of Igbo-Ora – ‘The Nation’s Home of Twins’ – reportedly almost every family has at least one set of twins, and in 2018, the town hosted a Twins Festival, attended by over 2,000 pairs.

Got a keen visual eye and an abundance of creative vision? Ignite your passion for photography and get your work published with our Certificate of Photojournalism!

Keep Little Ones Healthy With Our Child Nutrition Course!
Scroll to top