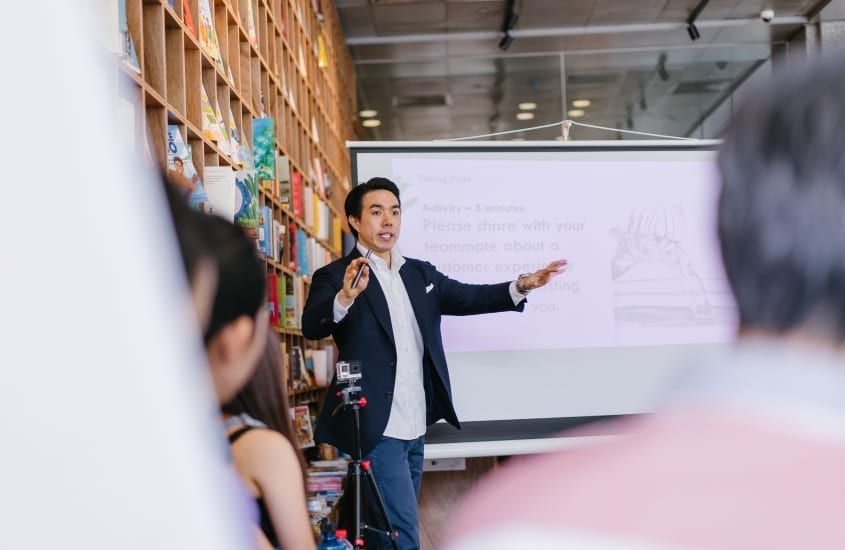 Finally, a presentation course that helps you to master your public speaking engagements. If you suffer from Fear of Public Speaking (affectionately called FOPS), you’re not alone. It’s often quoted as being in the top five of our biggest fears. But being able to communicate and present your ideas effectively can help you gain confidence, form strong collaborations and even advance your career!

However, whether your job includes leading team training, delivery sales pitches or designing PowerPoint presentations, your public speaking ability also needs to match the quality of your content to be successful. Our new course, Powerful Presentations, will help you do just that!

The cold, hard fact is that public speaking for many of us can be scary. However, much of the fear is due to how we interpret the situation. For many people it’s not the actual act of speaking in public that’s worrying, it’s something much simpler and more universal. Failure.

But public speaking can offer a range of benefits, so seeing it as an ‘opportunity’ rather than a ‘situation’ can help. It can enhance your confidence and be incredibly influential. And unlike some fears, you can prepare for it, which can downplay the negativity of the whole situation as well.

#2 – There Is No Such Thing As Failure

Much of the fear around public speaking is down to one simple assumption. People are afraid they are going to do a ‘bad’ job and even worse, ‘everyone’ will be there to see it. However, it’s harder to fail than you think because feeling isn’t fact. Which means what you feel isn’t always the reality. And often when you think you’ve done poorly, most people won’t even notice what you believe are mistakes.

Reframing your ideas about success and failure and focusing on learning from the experience (with the help of our presentation course) rather than fearing the outcome, will help it be less about perfection and more about curiosity.

#3 – Your Audience Is Behind You

Because the fear of public speaking is so common, and we all feel embarrassed at times, most people will be sympathetic with your nerves. This is because seeing you struggle through a presentation can often hit close to home! Also, in most cases, people want to hear what you have to say, not judge your delivery, so they want you to do well.

Even in a competitive environment, a landslide victory is not what people want either – they want engagement and entertainment. So the better you perform, the more fun it is for them!

#4 – The fear of public speaking is referred to as glossophobia

A cool and slightly geeky term, wouldn’t you agree?

Many remarkable people throughout history have managed to influence us in more ways than one. And the efforts, ideologies and opinions reflected in their speeches have led to life-changing situations. Here are three of the best.

There is also a lot to be gained from a host of entrepreneurs, writers and business leaders in the modern age. Follow these legends on LinkedIn for your daily dose of inspiration!

Richard Branson – Founder of the Virgin Group, Branson has more than 13.4 million LinkedIn followers, and his favourite themes include cherishing family, chasing your dreams and combating climate change.

Tony Robbins – An author and motivational speaker, Robbins shares pointers, articles and inspirational quotes on how to achieve success in everything from finances to relationships.

Gretchen Rubin – Rubin is a prolific writer whose achievements include four New York Times bestsellers. On LinkedIn, she offers insights about human nature, making and breaking habits and fostering happiness.

For even more inspiration, check out TED’s (a non-profit devoted to spreading ideas around the globe) Most Popular Talks of All Time.

If you have glossophobia and would like to learn not just to plan and build presentations, but deliver them confidently and successfully, check out our NEW Powerful Presentations course!